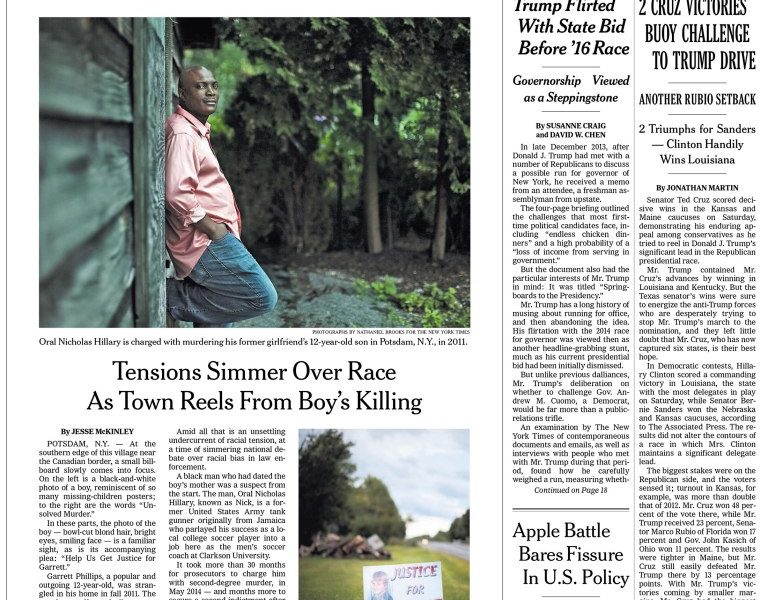 Goldman McCormick PR’s efforts to help a Father of five wrongly accused of murder have resulted in his story being featured on the cover of the New York Times.

POTSDAM, N.Y. — At the southern edge of this village near the Canadian border, a small billboard slowly comes into focus. On the left is a black-and-white photo of a boy, reminiscent of so many missing-children posters; to the right are the words “Unsolved Murder.”

In these parts, the photo of the boy — bowl-cut blond hair, bright eyes, smiling face — is a familiar sight, as is its accompanying plea: “Help Us Get Justice for Garrett.”

Garrett Phillips, a popular and outgoing 12-year-old, was strangled in his home in fall 2011. The murder set off a mad, all-consuming pursuit for a killer in a region where such crimes are extraordinarily rare.

The investigation has garnered widespread attention in part because of the case’s pulp-fiction filigree: a gruesome murder of a child, hints of a love triangle and faded affairs and a small town on edge over the idea of a coldblooded killer living in its midst or still on the run.

Amid all that is an unsettling undercurrent of racial tension, at a time of simmering national debate over racial bias in law enforcement.

A black man who had dated the boy’s mother was a suspect from the start. The man, Oral Nicholas Hillary, known as Nick, is a former United States Army tank gunner originally from Jamaica who parlayed his success as a local college soccer player into a job here as the men’s soccer coach at Clarkson University.

It took more than 30 months for prosecutors to charge him with second-degree murder, in May 2014 — and months more to secure a second indictment after the first was thrown out for prosecutorial misconduct. Despite the long pursuit, the case that a jury will hear this summer is far from perfect: There is a distinct lack of hard evidence, according to police testimony — no fingerprints, no witnesses, no hair or tissue samples, seemingly no conclusive forensic evidence at all connecting Mr. Hillary to the crime.

In the long lead-up to the prosecution of Mr. Hillary, his supporters have highlighted not only the absence of physical evidence but the lack of any plausible motive or history that would suggest he was capable of murdering a child. They have also said that another man, a local sheriff’s deputy who once dated Garrett’s mother, was removed from suspicion too quickly.

Garrett Phillips in 2011, the year he was murdered. Credit Courtesy of the Phillips family
But the authorities say they have the right man. They believe that Mr. Hillary killed Garrett as a way of punishing the boy’s mother for breaking up with him about a month before the crime. The mother, Tandy Cyrus, is white, as was Garrett.

They say that Mr. Hillary followed Garrett home and throttled him, leaving the boy for dead, and clumsily clambered out a back window as the police closed in, a frantic escape that left him with a telltale limp.

They say Mr. Hillary’s alibi — that he was with his daughter and then at a colleague’s house when the killing occurred — is undercut by assorted evidence, including surveillance video taken that day that shows Mr. Hillary’s vehicle near Garrett as the boy heads home.

“I can’t think of any other person who would want to hurt Garrett,” Ms. Cyrus said in a statement to the police after her son died.

Like the Raquette River, which splits Potsdam in two, the case has divided opinion and tested residents’ patience in St. Lawrence County, a rural and job-challenged region where 94 percent of the population is white. But the emotional impact on Potsdam is raw and evident: Garrett’s former teachers and family friends cry at his memory, while the village’s elders echo one another, saying such terrible crimes simply do not happen in places like this.

“It was like a meteor hitting,” said Ron Tischler, the mayor of Potsdam, home to around 9,600 residents that is about 25 miles south of Ontario.

Prosecutors obtained an order against sharing evidence with the press, but lengthy reports last year by North Country Public Radio and the now-defunct website Grantland led to revelations about the investigation. And Mr. Hillary, now 41, has made his plight known. His supporters — including former teammates and alumni from his alma mater — have waged an increasingly vocal public battle, in part through a website, Truth for Nick Hillary, in hopes of bringing attention to the charges against him, which he says have devastated his life and career. He has sued the Village of Potsdam and the police for civil rights violations, leading to sworn depositions that have also shed light on the case.

Mr. Hillary has also accused the county prosecutor, Mary Rain, of forsaking justice in the name of keeping a campaign promise: Ms. Rain was elected in 2013, in part on the strength of campaigning with Ms. Cyrus and promising to focus the energies of her small office on Garrett’s murder.

Ms. Rain has enlisted William Fitzpatrick, a respected district attorney from the Syracuse area, to assist in the case.