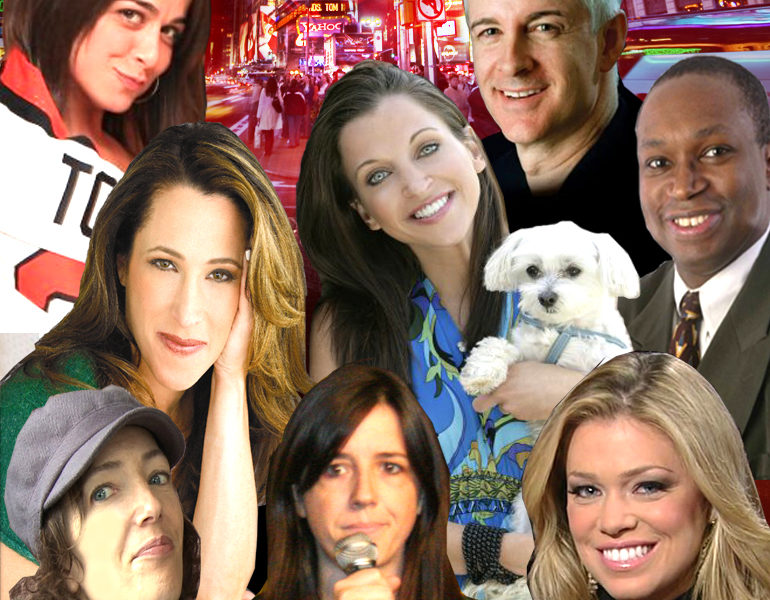 David Weiss / Show Emcee
A native New Yorker, David’s radio and TV career of nearly 40 years has spanned the fields of news anchoring and reporting, sportscaster and TV & radio talk show host as well as a 4-year stint as a TV weather person. His career journey has taken him from Massachusetts to Rhode Island, and then returning in 1989 to Long Island and New York City. For the past 12 years, he has been heard as a news anchor at 1010 WINS. He is also the radio voice of Long Island Ducks baseball, and editor of Long Island’s ‘Golfing Magazine.’ David took part in the 2017 New York’s Funniest Reporter event and has become a popular presence on the Long Island standup comedy circuit. David lives on the south shore of Suffolk County with his wife, two daughters, and neurotic therapy dog.

Anne D’Innocenzio
Anne D’Innocenzio has been the national retail writer for The Associated Press since 2000. She closely follows Wal-Mart, Target and other major retailers and has been chronicling how companies are overhauling their businesses in a dramatically shifting landscape. D’Innocenzio regularly appears on AP Radio and has been on National Public Radio and MSNBC to offer her take on the retailing business and shopper habits. In 2013, she was honored by the Society of American Business Editors and Writers for her feature that examined the complexities surrounding ethically sourced clothing.Before joining AP, D’Innocenzio covered the fashion business for Women’s Wear Daily.

Gerald Celente
Gerald Celente is Publisher of The Trends Journal. Celente, who developed the Globalnomic® methodology to identify, track, forecast and manage trends, is a political atheist. Unencumbered by political dogma, rigid ideology or conventional wisdom, Celente, whose motto is “think for yourself,” observes and analyzes the current events forming future trends for what they are — not for the way he wants them to be. And while Celente holds a U.S. passport, he considers himself a citizen of the world.

Maria Dorfner
Maria Dorfner is the owner of NewsMD Communications, a full-service production company specializing in Health. She develops original health content and provides PR services for the best in health services and products. Her clients have included a Who’s Who in Health and she’s been a medical/health stories go-to resource for NBC, CBS, ABC, CNBC and other stations. She says one of the most important things is maintaining editorial control. It’s important to report medical stories in an unbiased way and make sure to cover all angles, i.e. the good, bad and ugly so people can make informed decisions. It’s vital to provide reliable and accurate information to the public, as that public includes your own family and loved ones. She turns down a lot of stories that don’t measure up to what she calls her journalistic scrutiny based on over three decades of experience. Her health blog is at NewsMD: What’s Hot in Health.

Ed Kalegi
Ed Kalegi is an American voice actor, radio personality, host, and actor based in the New York City area and born in 1967. Currently the host of “America Weekend with Ed Kalegi,” which is syndicated nationally by the Envision Radio Network. The program is heard coast to coast on Radio and is also available via Audioboom and iHeartRadio. The show is a new take on TalkRadio. The show is a mix of light Comedy and Lifestyle stories. The show deals with Entertainment, Health, Travel, Business, Sports, Parenting, Film, and more. Guests have included Dick Cavett, Melissa Gilbert, Henry Winkler, Chris Matthews, Shannen Doherty, and others. He is also the afternoon Traffic/Weather/Sports personality on WBBR (Bloomberg 1130) Radio in New York City.

Michael P. Regan
Michael P. Regan started out in journalism in the early 1990s at small newspapers in Pennsylvania and New Jersey, covering stuff like zoning boards,car wrecks, and earning less than the drivers who delivered the papers. He moved to New York in 1999 to work at FoxNews.com, mainly because his cable service didn’t carry Fox News so he assumed the anchors were all like Kent Brockman from “The Simpsons.” After discovering he wasn’t Fox material, he moved to the Associated Press in 2000 and transitioned to financial news. However, when he moved to Bloomberg in 2007 to cover stocks, his earliest experience turned out to be the most valuable because the stock market quickly turned into a car wreck. He currently runs Bloomberg’s Markets Live blog, has written cover stories for Bloomberg Markets and Businessweek magazines, appears regularly on Bloomberg TV and Radio, as well as NPR and just about any other media outlet that agrees to send a car service.

Aaron Elstein
Coming to Crain’s New York Business in 2003, he wrote “Heard on the Street” columns at the Wall Street Journal, covered bank mergers for American Banker, and got his start reporting on downstate Illinois graft and corruption for Illinois Times in Springfield. His articles, columns and blogs have won numerous awards over the years, including from the Society of American Business Editors and Writers, the Society of Professional Journalists, the Alliance of Area Business Publications and the Jesse H. Neal National Business Journalism Award. He lives with his wife and son and spends much of his free time worrying about the Red Sox.